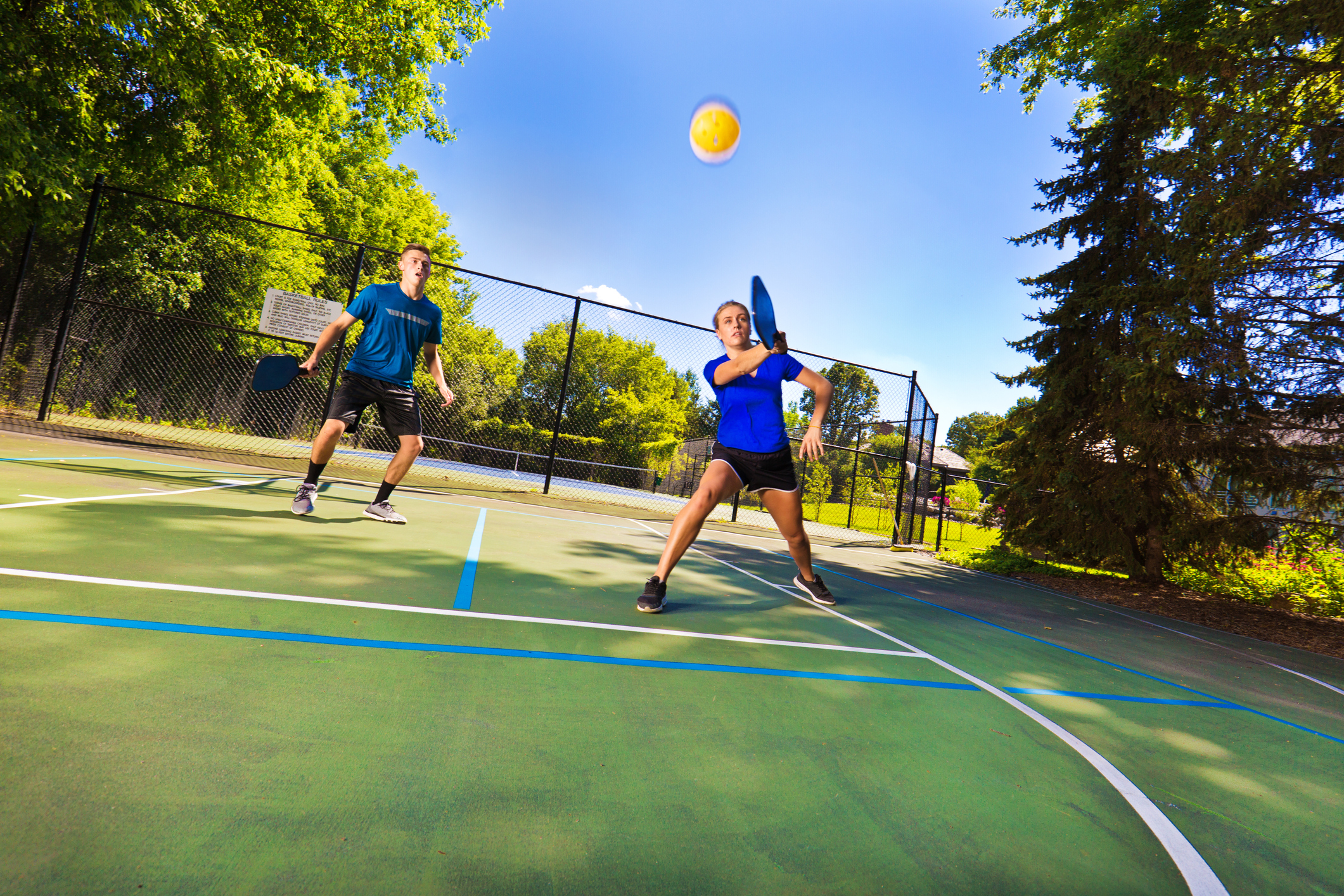 Picture this: a friend has just introduced you to the fun of pickleball — congratulations! This friend has invited you to join them for a game at a gym complex with facilities for several different sports. You arrive, make your way inside, and see people carrying their racquets, balls, and gear out of a court with a net in the middle. The sign near the court reads, “Paddle Tennis.”

Is this the court where you are supposed to meet your friend? Is “paddle tennis” just another term for pickleball? Does tennis not already use equipment that could be referred to as paddles? The short answers are no, no, and not quite. This article will give more in-depth answers to these and other questions, including the big one: “What’s the difference between pickleball and paddle tennis?”

How Are They Similar?

Pickleball and paddle tennis are both variants of tennis, and they play similarly. Players on opposing sides of a court must lob a rather small ball beyond their opponent’s reach. They have to hit it by swinging a racket, and the ball must touch the ground within the court’s boundaries to count for a point. A net bisects the field, creating an obstacle. The court does not have any doubles alleys, so no matter how many people are playing, they can always use every inch of space.

Other elements that they share in common help differentiate them from the sport that preceded them. In tennis, rackets traditionally have solid frames with taut strings crisscrossing the interior. Paddle tennis and pickleball keep the overall design but eschew the strings, opting for either air holes or an entirely solid paddle. Tennis court dimensions are also much larger than those used for either of these sports, which might make them more preferable alternatives for families with younger players.

How Are They Different?

Pickleball and paddle tennis are similar in these regards, and they might look exactly the same at a glance. However, they really do have a variety of distinctions from each other. Some of them only become clear when you are in the midst of a match. We will outline some of the more notable differences below.

The standard size of a paddle tennis court is 50 feet in length and 20 feet in width. According to the regulations regarding pickleball court dimensions, a standard and purpose-built court can be just as wide but six feet shorter in length. Courts converted from ones designed for tennis may be larger than paddle tennis courts, measuring 60 feet long and 30 feet wide. Those designed for tournaments may be larger still.

Standard pickleball courts are already slightly shorter in length than paddle tennis courts. Despite this, they increase the challenge by giving players even less space for hitting the ball. Extending seven feet from either side of the center is the “non-volley zone,” where players are forbidden from smacking the ball back over the net.

Paddle tennis has no such compunctions with a central zone (though players on the west coast may use a “restraint line”). It does, however, feature a “backcourt” — the last three feet of the court’s length, bracketed by the baseline and a service line. Otherwise, the layouts are similar, with four service zones and no doubles alleys.

In both pickleball and paddle tennis, the player’s sole form of offense and defense is a handheld racket. Curiously, the regulations for both sports include rules on the sizes of rackets allowed for play. The former keeps them small, with 17 inches in height as the maximum. The latter is far stricter, commanding that racket height must be no taller nor shorter than 17.5 inches.

Another difference in equipment comes with the balls. When pickleball was first invented, its creators played with Wiffle balls. Since then, players rally with smaller balls that are plastic and riddled with holes. Paddle tennis, not quite so out there, uses rubber balls with less pressure than the standard tennis ball.

Paddle tennis, designed near the turn of the 20th century, takes its rules for scoring points from its namesake. Players start at “love” and go from 15 to 30 to 40 to victory. If you have played tennis, then you already know how this one goes.

Pickleball, meanwhile, is simpler and yet more complex. This game was invented in the 1960s and abandons the traditional system for something that is simpler yet more challenging. Every point counts as one point, but players need to rack up eleven for a win. More accurately, and just like tennis and paddle tennis, they need to score two more points than their competitor.

Pickleball takes another left turn in its scoring system with regards to when a player can earn a point. In this sport, only the serving player or team can score in each turn. If their opponent fails to outmaneuver their opponent, they get the point and serve again. If they succeed in defending their side, the serving player or team gets a fault. Meanwhile, the defender does not score a point; their only reward is to take their turn in serving.

Once again, paddle tennis sticks with tradition, giving players points for successful offense and defense. This puts more pressure on the serving team to perform well. On the other hand, one could say that pickleball also encourages a great show by removing punishments for bold moves and unusual plays.

Paddle tennis and pickleball are quite different in certain respects, yet similar in many others. Regardless of which sport you prefer, both can provide plenty of fun and excitement for you, your friends, and your family. If you are interested in taking up either or both of these games, Tennis Court Supply can provide everything you need to get started. We offer high-quality equipment for paddle tennis and a great selection of pickleball court supplies. Feel free to visit our online superstore today and place an order right away.